Is it all about food 24/7? Am I doing anything other than cooking and eating? There’s always room for some fooding, enjoying Paris and hanging out with friends. When I was still in Didier’s apartment on the 11th district there wasn’t any wifi available so I had to be amused by sitting in the balcony looking into other people’s apartments. 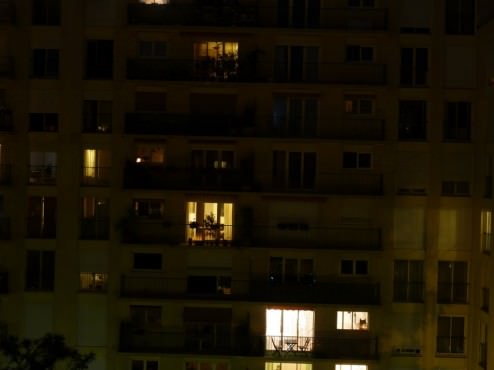 It was kind of lonely being alone without internet connection but I decided to go out for a little tour before school begins. I met Erika, Lily, Clair and Ze. The tour around the left bank was excellent and the guide here in the middle of the pic was very cute telling us many funny stories. Recommended! 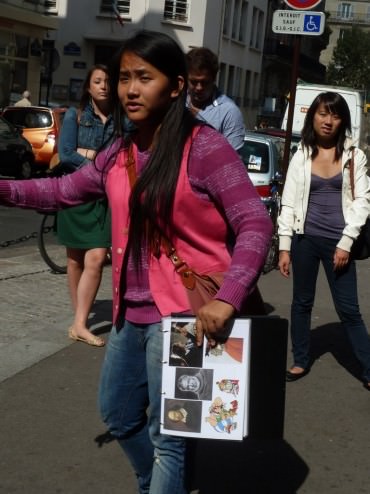 Walking in the guided tour

After that the five of us went to drink wine in Luxembourg garden, Ze selected a light Pinot Noir so we can continue with our day later on 🙂 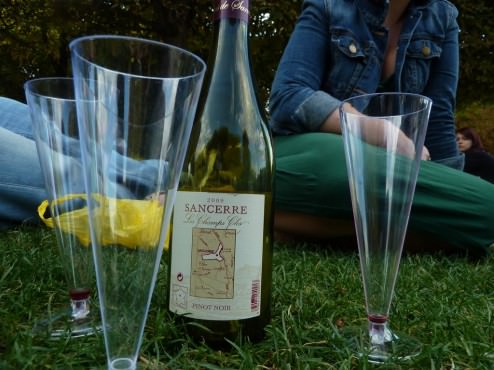 Sitting in the allowed section of the grass

Last weekend I moved to my studio at the 15th district. I was so happy to have my own place and get arranged with everything. I instantly fell in love with the neighborhood. I have everything close by, and it’s a beautiful area. As soon as I’m stepping out of the building I see the top of the Eiffel Tower just over the line 6 bridge. I have a next door coin laundry. Rue Commerce is 2 blocks away (a great street with cafe’s, bars, restaurants, fashion and department store.. ), the local bar that’s always packed with people. 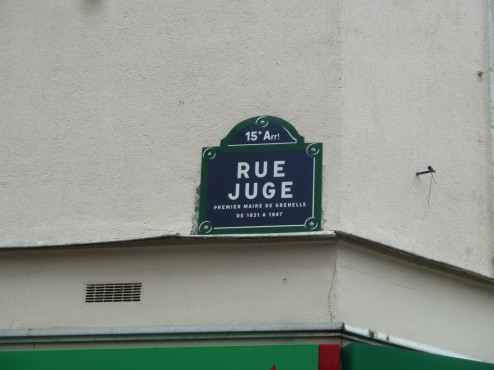 A small tour in my tiny studio: 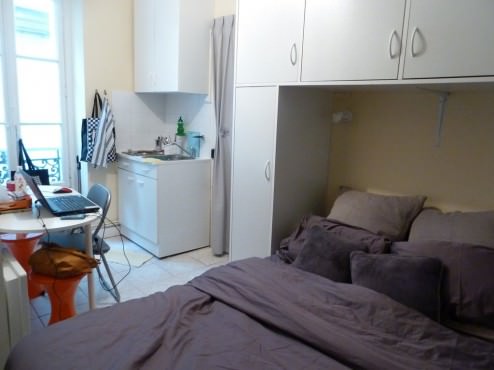 A view of the dinning room/kitchen through the bedroom 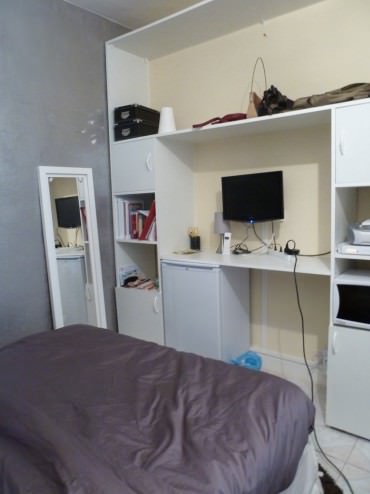 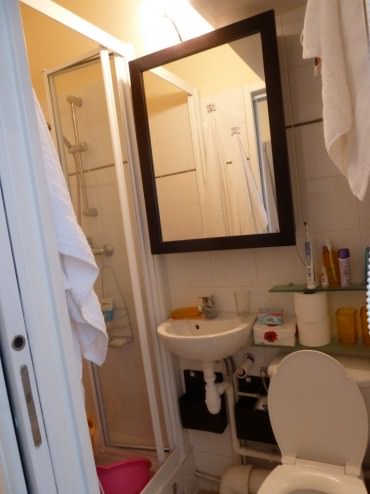 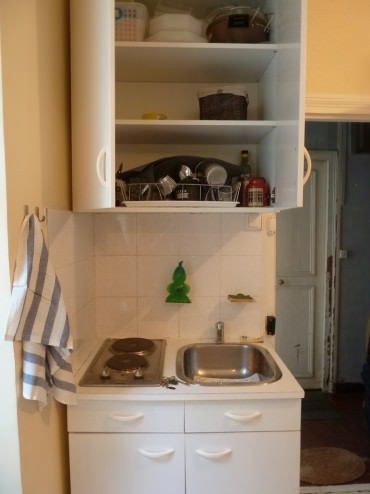 Equipped kitchen with everything anyone needs 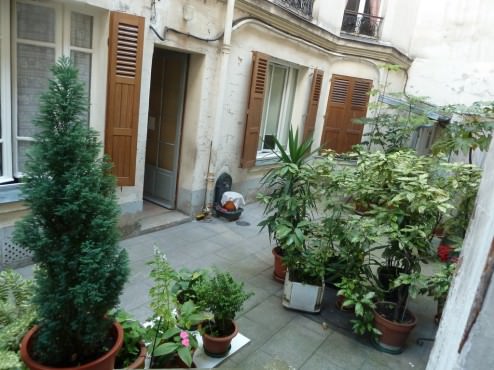 The building's inside garden 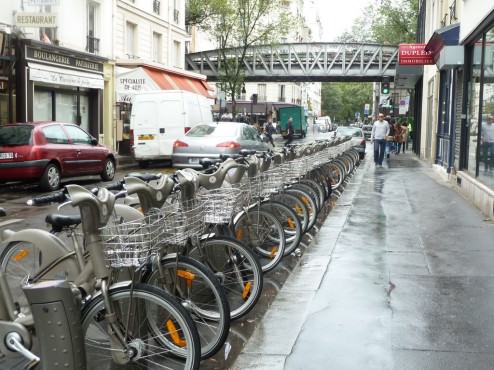 Rainy day and the metro bridge 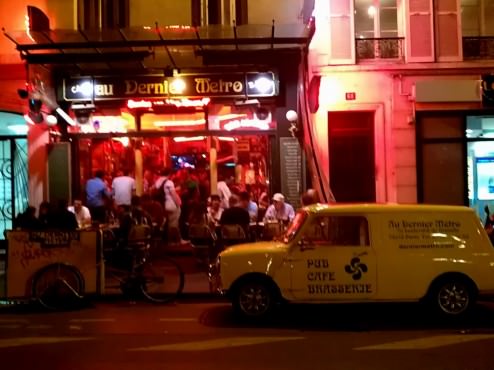 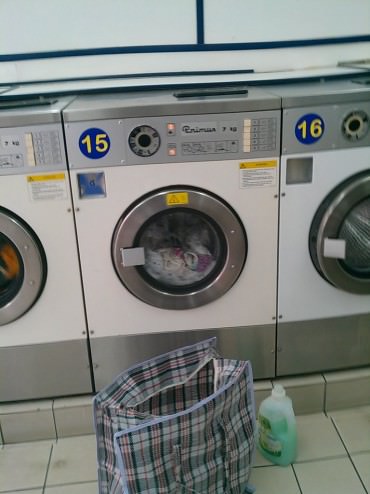 Coin laundry as an extension to my stuidio

Going out in a week’s night is not that obvious. As I explained we are two groups, working in the kitchen in shifts of morning and afternoon. One group begins the day at 8AM and finishes at 3Pm-6PM and the other begins at 9AM-12AM and finishes at 7PM-8PM. We change shifts every week. The problem is, first of all, the complete opposite between the groups makes it hard to meet with the other group, I sit with them sometimes at lunchtime, but that’s about it! The other thing is when we have the morning shift, going out can only be very early and when we have the afternoon we finish tired and stinking, holding heavy soups, first thing on mind is to go home shower and after that it’s not always easy to go out again and meet. We did get to go out a bit, even though this week was extremely overwhelming. 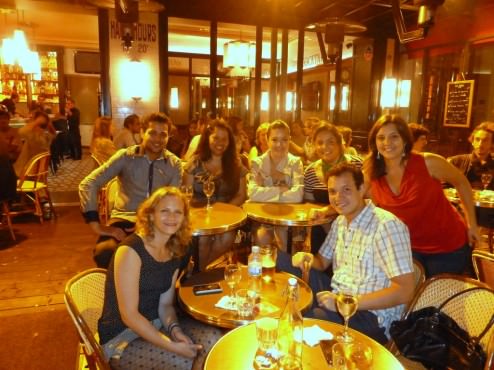 With Marisabel, Roni and friends 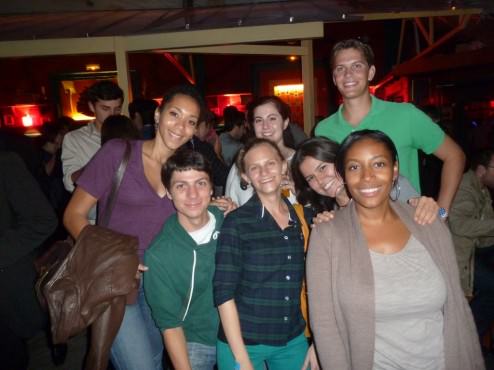 Half of Anglo A, going out straight out of the kitchen even before shower, living on the edge 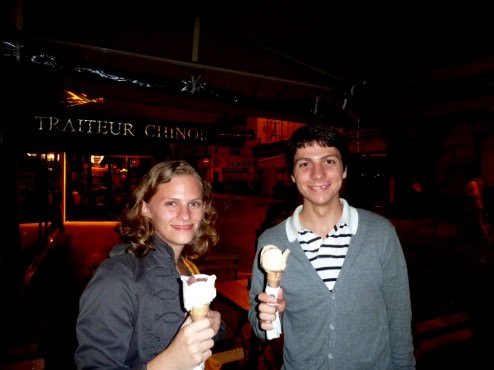 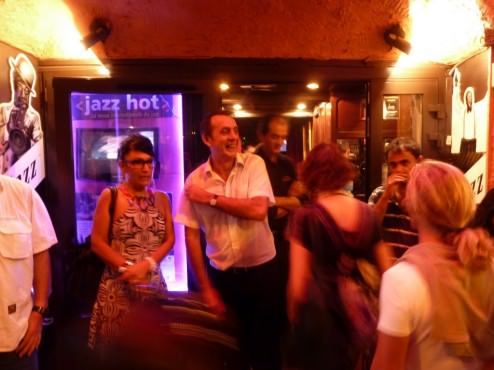 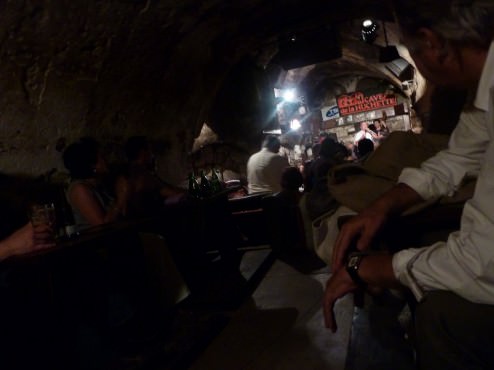 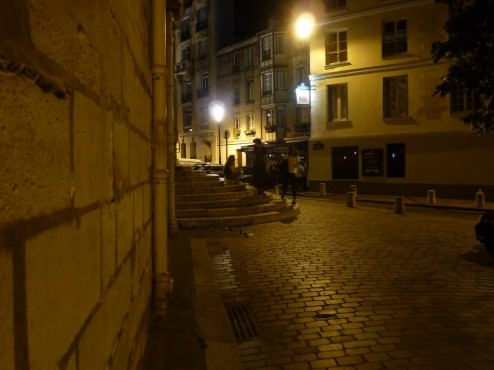 Night walking. Recognize the stair case from "midnight in Paris"?

This weekend, except for trying to consume all the soup I’m able to and distribute it to Rotem, I also had to make a lot of laundry. And a lot of ironing afterwards. Was raining this morning so the electricity fell out and I was a bit nervous until I found where’s the main shulter. 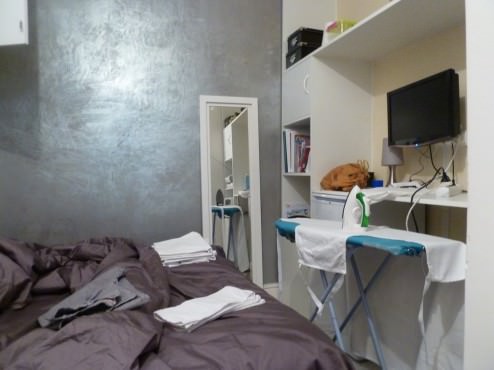 I went to buy a chair I was missing besides the table to write all my blog posts in comfort. I couldn’t find a chair in a walking distance from my studio so I had to find some other possibilities. Ikea, everyone said, but it’s out of city and I’ll have to carry it all the way back. Ebay was another option but It was all pick yourself from somewhere style. In the end I took Ishuan’s advice and went to Conforama which is like a small Ikea (3 stories) inside the city. It seemed easy but as always in France, it was a mission. First I had to choose, then stand in line #1 to get a note with the number from the agent and feed my details in a computer. Then I had to stand in line #2 in order to pay. Then I went to storage, waited to my turn the third time just to find out I had to go across the street to register first. There I was put into line #4 for my chair to get prepared. When my time had finally come I went back across the street and again handed my recipe to get the actual chair. Then I dragged the damn thing through the metro (with a change in the middle). It wasn’t so heavy as much as it was hard shape to hold. Came home and installed it in 5 min! Now I have a chair, I’m so happy. 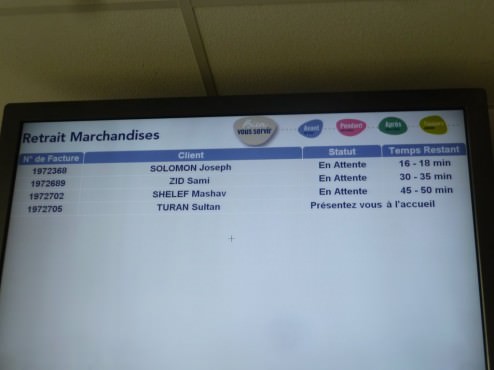 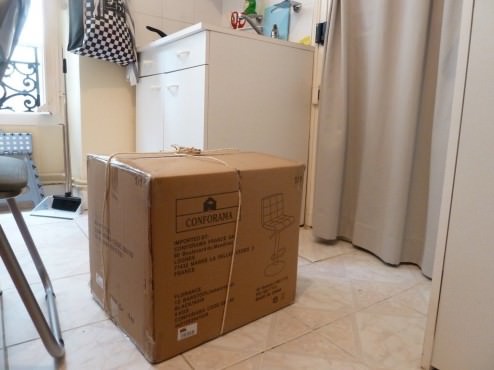 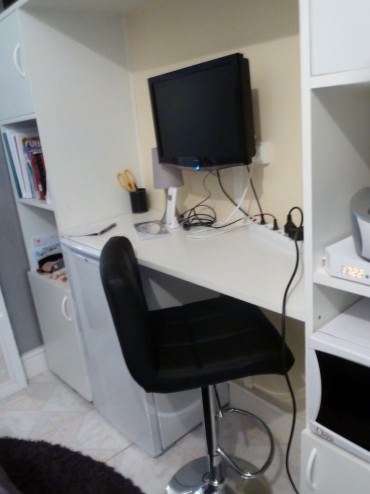 To finish I want to add some pics of whatever I’m eating when I’m at home. 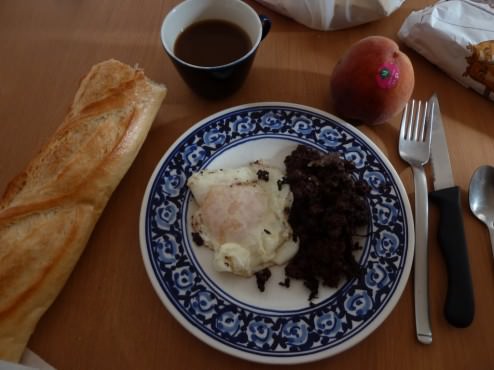 Blood sausage, dad it was so good fried, you were right! 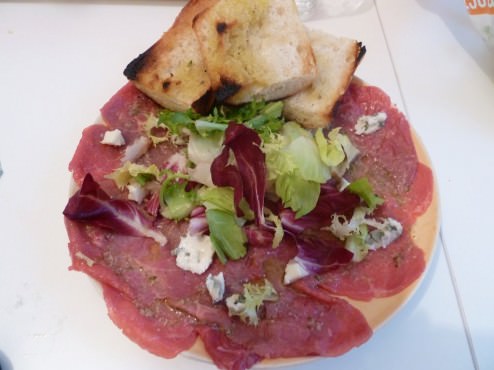 Carpaccio with toasts and salad 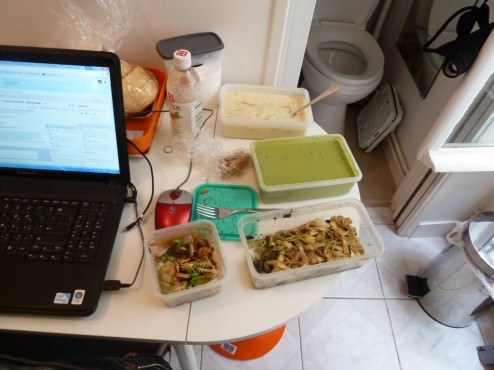 Some soup for dinner, why not? 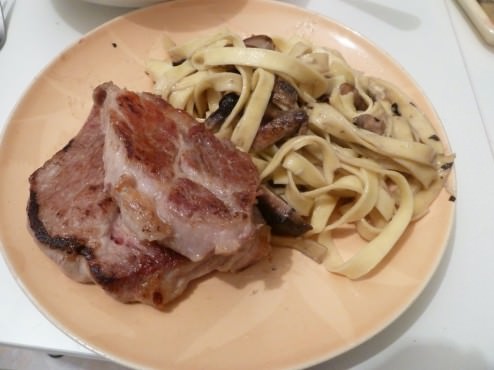 On weekends I get to make an actual meal for myself 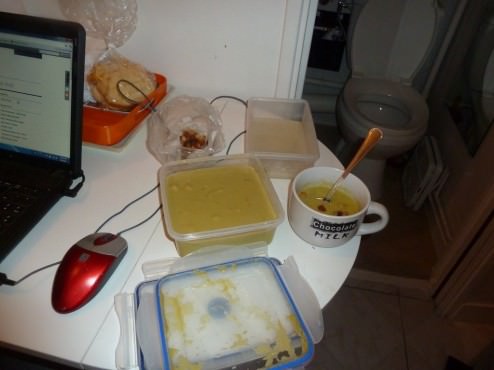 But throughout the week, just some more soup. 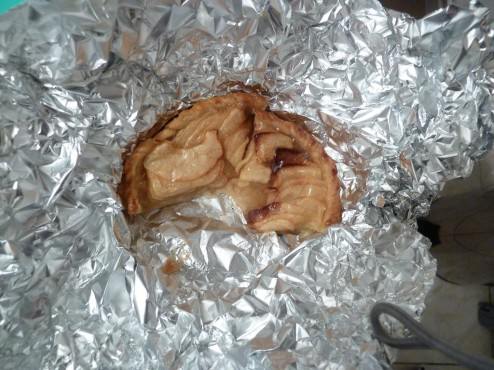 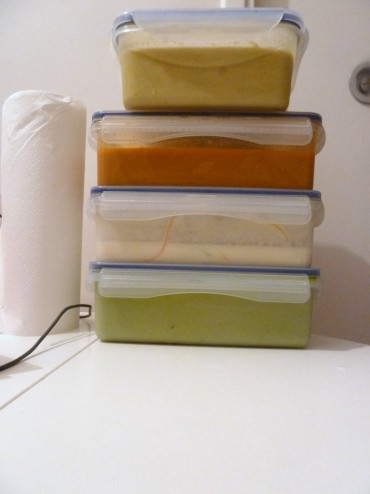 At the end of the week I had a complete set.

I will try to add some mini-posts concerning my personal thoughts and experiences, maybe something more poetic. Next week – second week of soups, behold!

6 Responses to Paris life outside school