A Tribute To My Grandmothers

This post is dedicated to my two grandmothers because this Pastry-Monday we made Créme Caramel and Mousse au Chocolat, both are one of their specialties. We also made Pot au créme and Créme Brulee so all together we had 4 recipes this day. 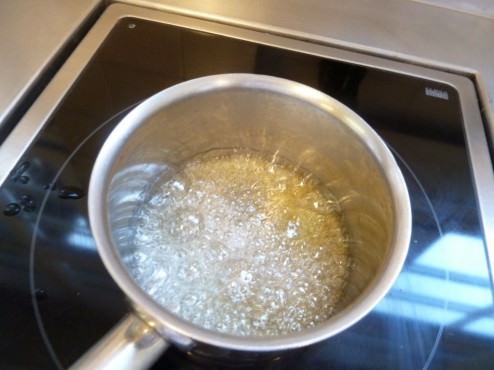 Making caramel from sugar and water 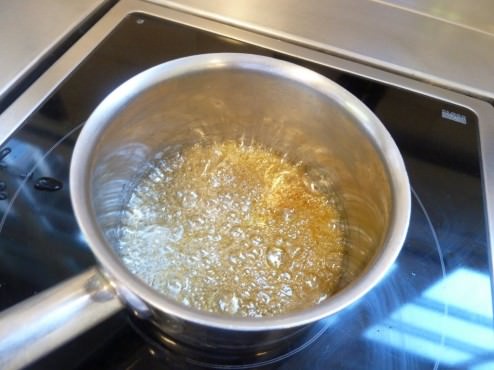 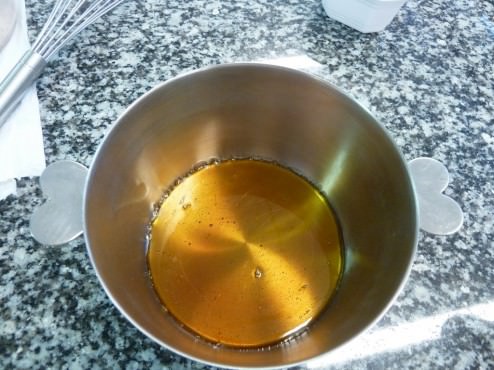 Glaze the bottom of the Créme Caramel Mold 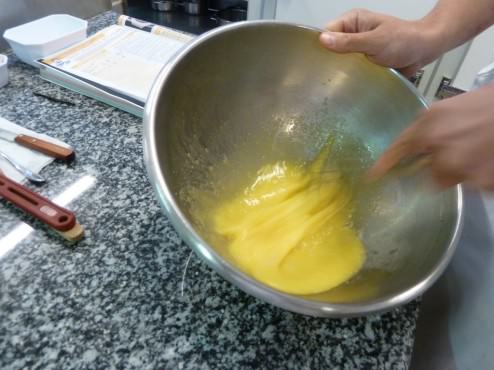 Beat whole eggs with sugar. Mix slowly with milk boiled with a vanilla bean. Poured to the mold and put in the oven in a bain marrie.

Next thing we did was the Pot au créme which are almost the same as the caramel only using just the yolks and we added flavors to it. 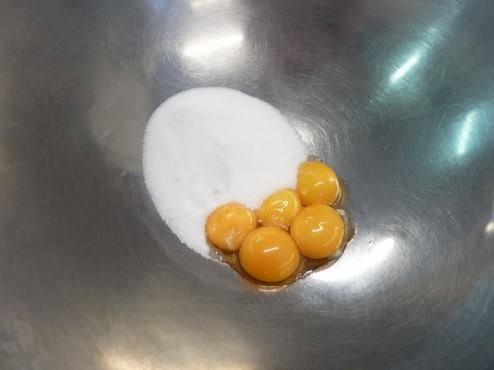 Yolks instead of whole eggs 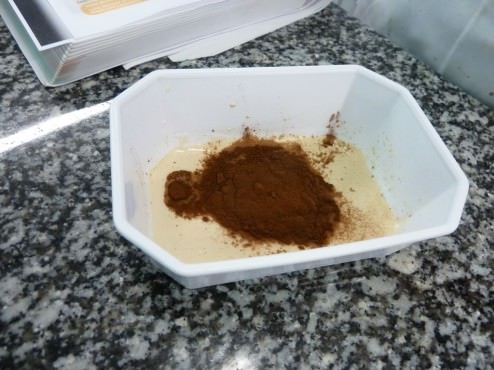 The mixture was cut to three and flavored. One was coffee-chocolate 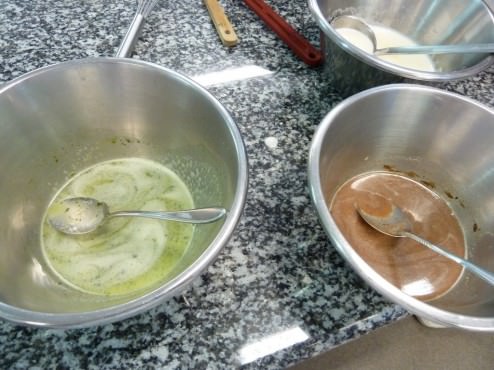 The other two were Pistachio and Praline 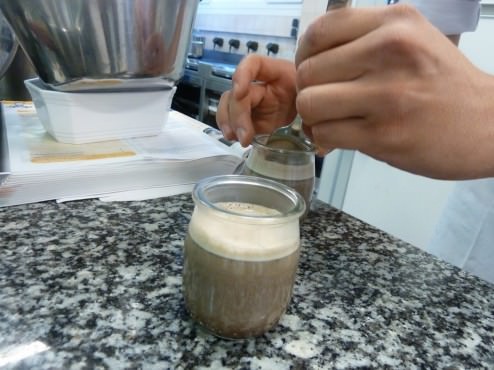 Inside the pots, tried to remove the foam quite unsuccessfully 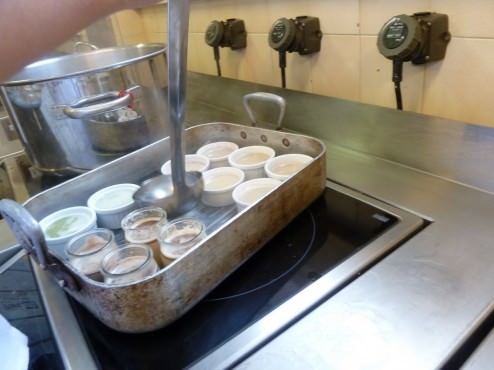 These also went to the oven inside bain marrie 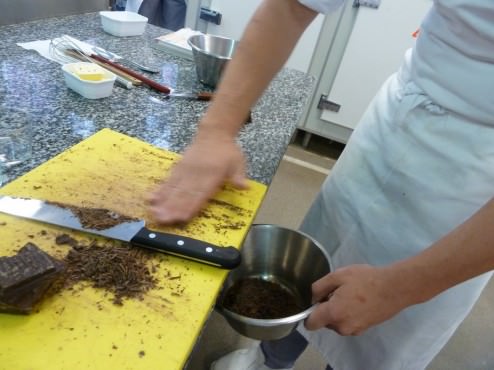 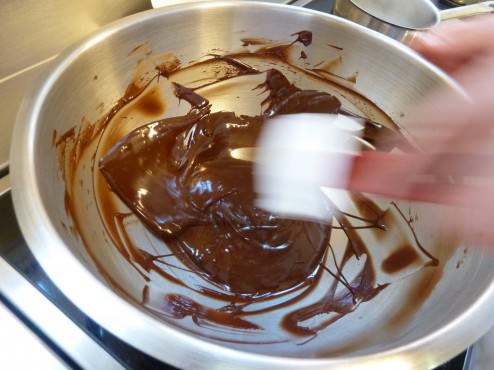 Melted over a double boiler. Added yolks and then butter 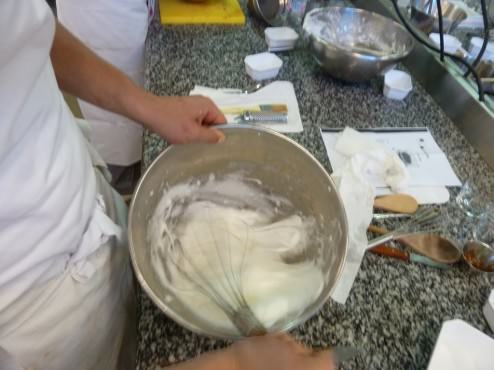 Whipping the whites of the eggs 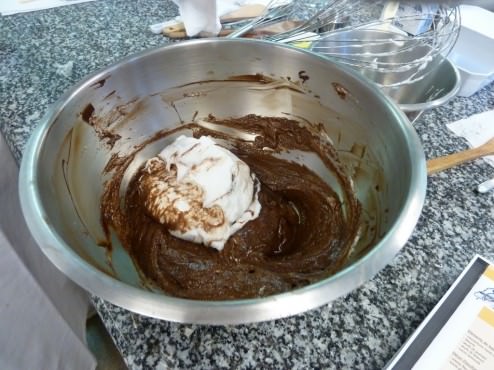 carefully folding the whites to the chocolate 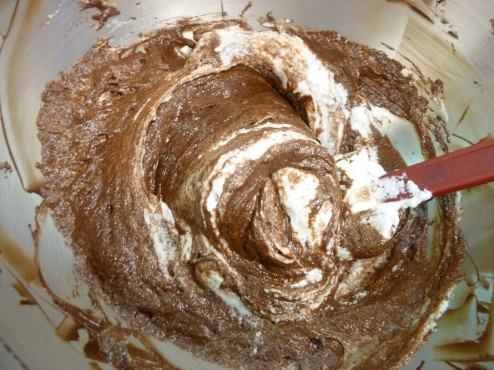 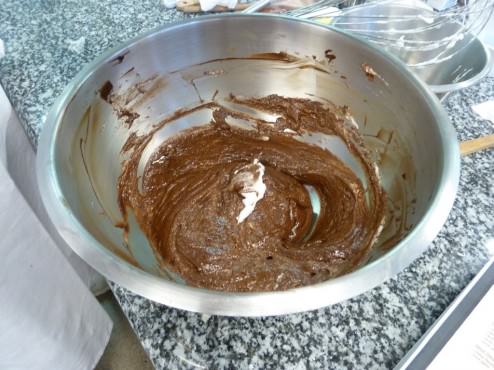 Adding a dash of whipped cream as well 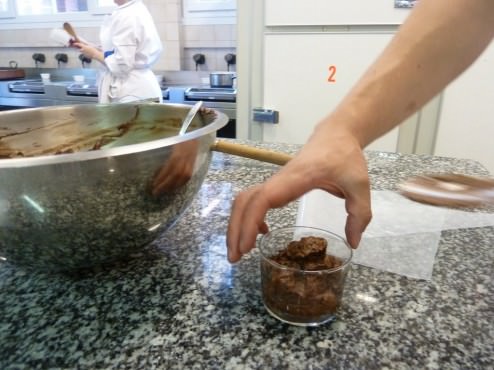 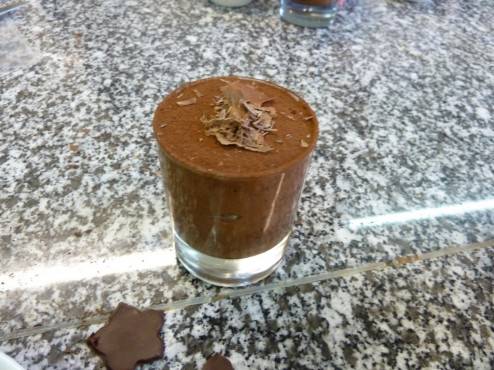 Decorated. This is the chef's mousse, I don't have my own mousse close up picture 🙁 Very sad, I forgot

The Créme Brulee, made similar to the pots au créme, with yolks, only this time using cream instead of milk boiled with double amount of vanilla bean. Then poured into Créme brulee plates. 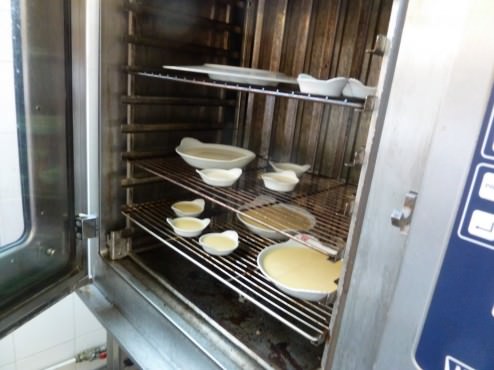 Cooked on a low temp, until the border is set but the middle is still soft 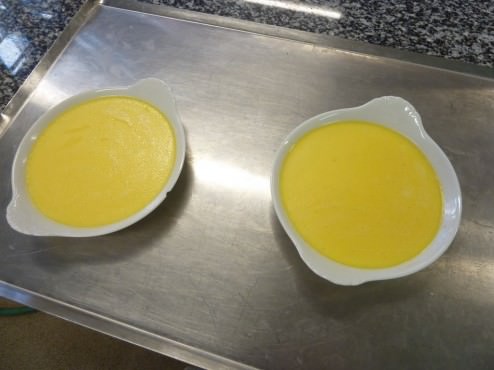 Made two big ones and three baby 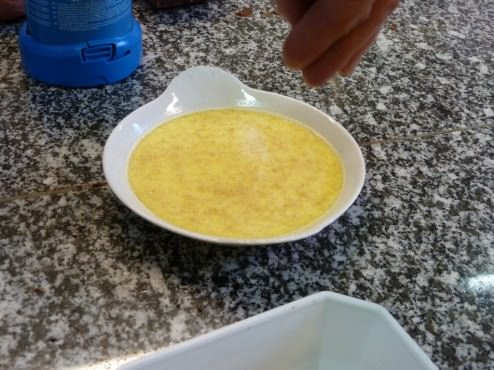 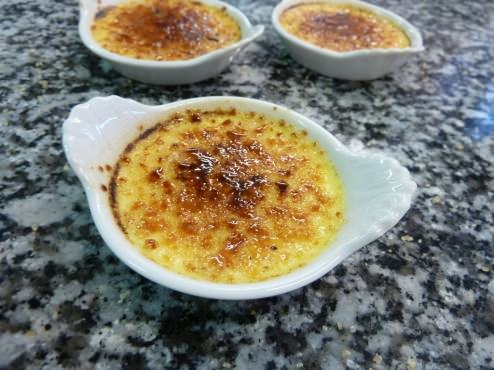 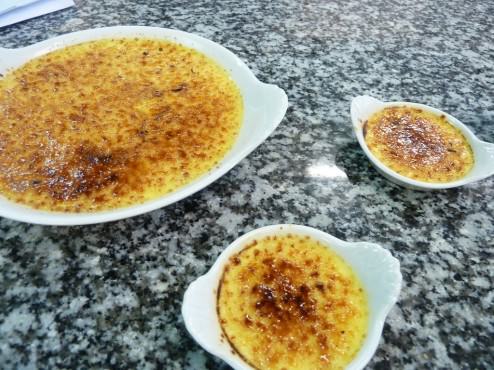 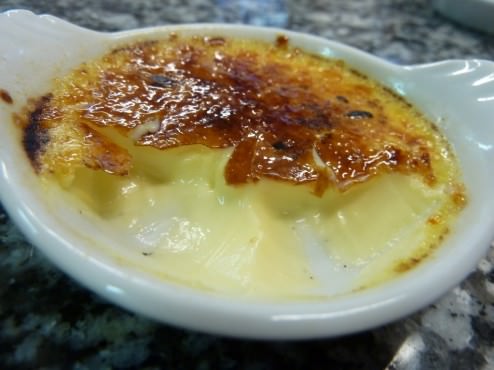 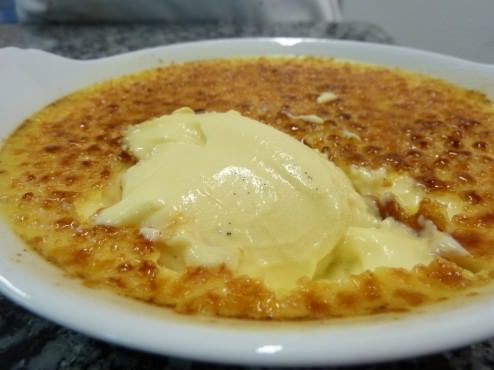 Chef's testing of our créme to see if it's the right consistency. It sure was! 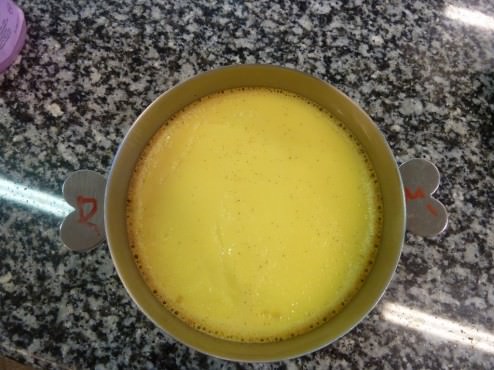 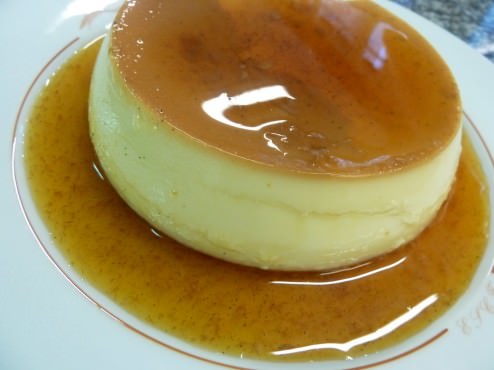 Was yummy but there's room to improve, the caramel changed color on top (why?) and the liquid caramel we made last second wasn't clear, even flipping wasn't perfect. 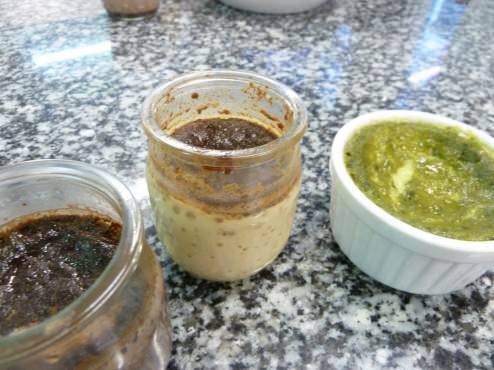 The poor pots were over cooked for most of the people in class. Overcooking things like that is causing a separation of the eggs and liquids and makes it pretty horrible. The pistachio paste flavor wasn't as good as I hoped for, tasted too artificial and we can call it the worst dish of the day 🙁 Next time has to be carefully monitored in the oven! 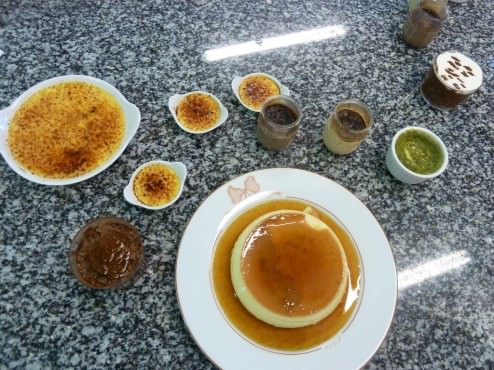 The whole bunch together.

The winner of the day was definatly the Créme brulee. I had tasted many créme brulees before but this one was awesome. Classic but very very very good! Even two days later it was still so awesome. Chef says that the reason is that we used the convection oven in low temp instead of bain marrie in the baker’s oven in higher temp. Maybe it was the yolks with cream and burnt sugar on top? I don’t know. Next one, on second place, was the Créme caramel which was very good but not perfect. Also the fact that I tool it home in a plastic Tupperware and when I got home it was already a soup mooshed together. Not nice at all!! The third place goes to the chocolate mousse and too bad it got just third place because I’m a chocolate mousse fan, so how can that happen? The reason is that something was not that good with our preparation (Rob and I worked together this day). Not sure what and chef couldn’t explain as well. The mousse was very heavy and taste wise lacked something. Later on I checked Jean’s recipe to see the differences, found out it was pretty much similar except for putting some Brandy that we didn’t add and could improve the flavor a lot. Probably we made some other mistake, has to be repeated and improved. The last place took pots au créme because they were overcooked, lost the right consistency and  flavors we added were a bit artificial.

7 Responses to A Tribute To My Grandmothers