As popular and common the chicken is in Israel, still the French has their own methods to deal with this bird, I never seen before. For me it was a first time to handle a chicken that way and these two first days of chicken were very intense and harsh. We had to prepare the chickens for the first time very fast. I was falling behind at one point due to something chef was asking me and Shane to do in the middle and also because I had a back of the class station that made it very hard to keep track of what was going on. This first chicken day was planned for us to prep two chickens and cook one recipe, leaving the second chicken for the next day’s recipe.

Problem was that we had so many demos this day that there was no way to finish the first recipe this day. Chef kept changing plans in the middle of working which made me confused and in the end we had to prep two chickens one day and cook two recipes the next day. I got to only prep one and didn’t even finish all the garnish for the next day, meaning the next day I had been behind as well. What also was a critical mistake I made was to forget the notebook where I wrote the instructions for the second recipe. The first one I kinda already forgot from the day before and in class I felt lost. It made this day the hardest because I was not sure what should be done and exactly how and why. Two of the recipes were a mix in my head, and in the middle of work I felt like giving up.

Chef thought about a crazy idea just to make this day even crazier, and made us roll a number in an iphone application he had, and this number means the order of us presenting our dish. We started working this day at 3:30PM and the first had to present at 6PM. I rolled the number 4. As you can imagine I was a wrack. Needless to say, no one finished any dish at 6PM, even the chef, there was not enough oven space to support this idea and at 5:58 I still didn’t put my chicken in the oven. Went to Chef, asking him how can I present the dish in 8 minutes if I can’t put my chicken in the oven, he answered: you won’t present on time, like most others. At this point I realized I’m not the only one struggling and took a deep breath and just did my best.

I noticed at some point the oven was shut off for some reason, and my chicken was undercooked but it was too late to fix it so I just presented what I had. I forgot to check seasoning and taste my sauce which was a bummer, and I couldn’t make time to take pictures, only when we had demos. In the end many others also undercooked their chicken, and Chef didn’t even taste the sauce. My personal lessons from these two days are: 1. try to be closer to the chef as much as possible. 2. to never forget my notebook. 3. don’t trust “baking times” when several people using the same oven and it constantly opens. 4. don’t hesitate in the first few steps even if it’s first time; The next steps will be delayed as well. I’m really happy I took many videos of prepping the chicken because watching them after trying doing it on my own helps a lot. You’re free to enjoy it as well. 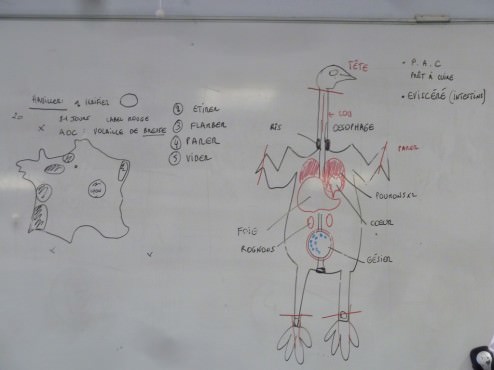 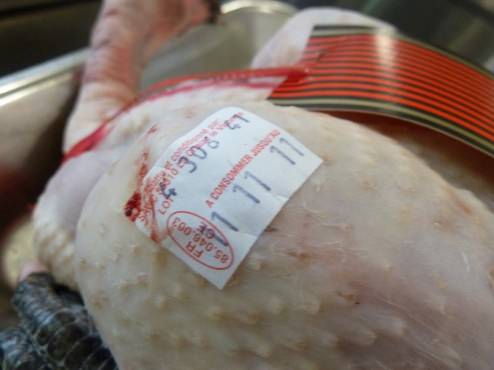 The Label. In France the label on the chicken says everything. There's a red label, AOC chickens that costs about 50 euro a piece and so on. This one has the 11/11/11 mark on it 🙂 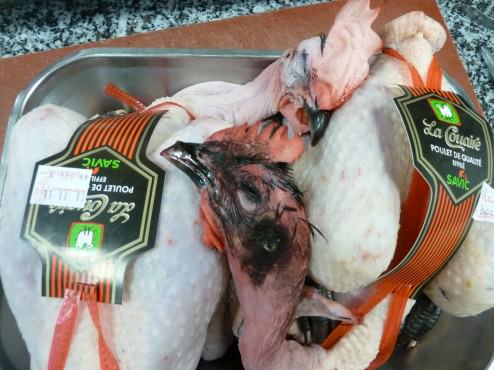 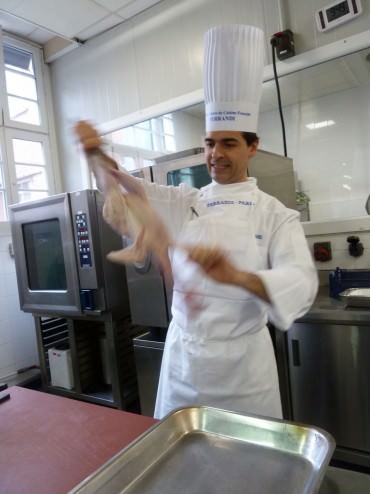 Before doing anything, etirer. Stretch the chicken 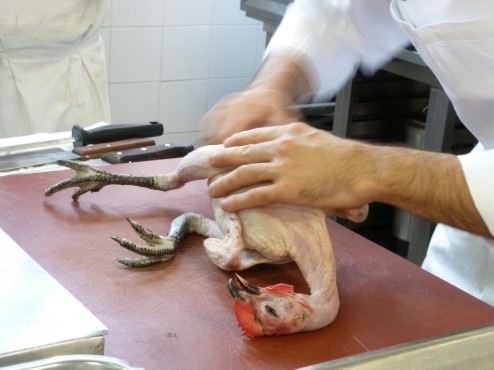 Every feather has to be taken out 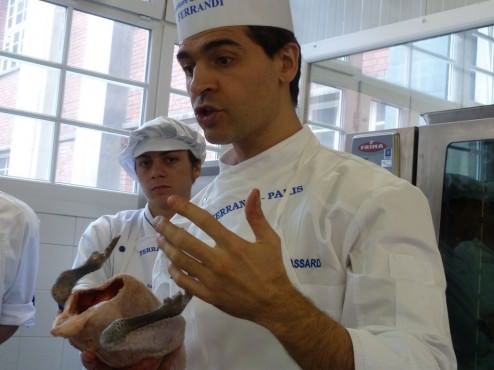 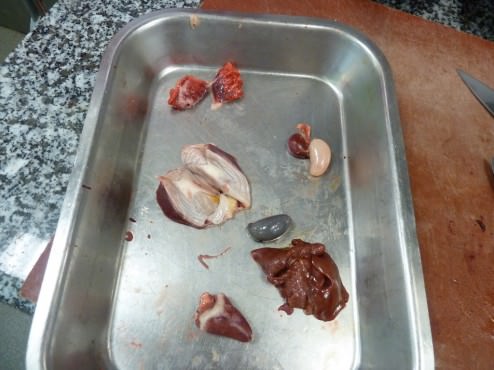 All my cleaned inside parts. There was no need for them today but I took them home

Prepping chicken 7 – Taking out the wishbone 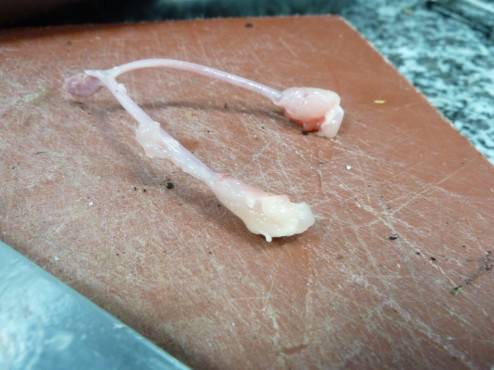 After all this preparations, the cooking can begin. 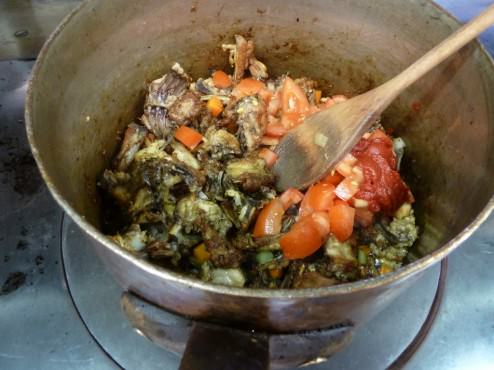 Making a chicken stock, dark and white. This is the dark 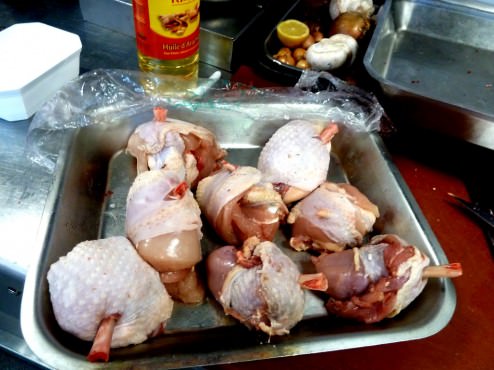 Outcome of all the hard work on both of my chickens 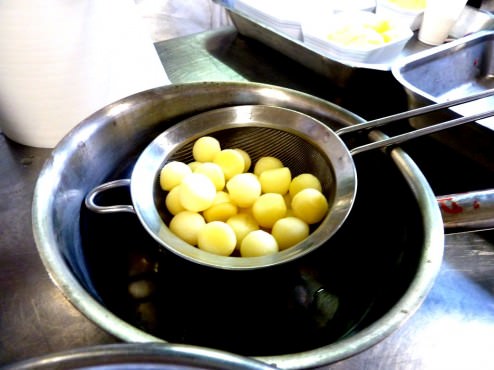 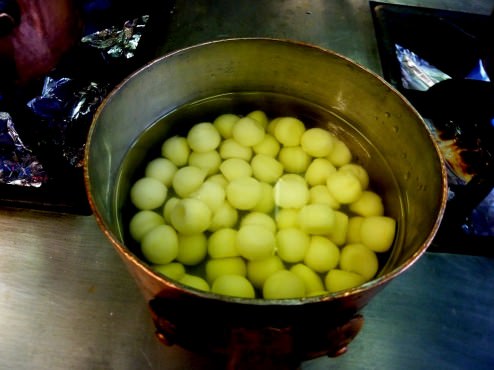 Blanched, shallow fried and then baked. 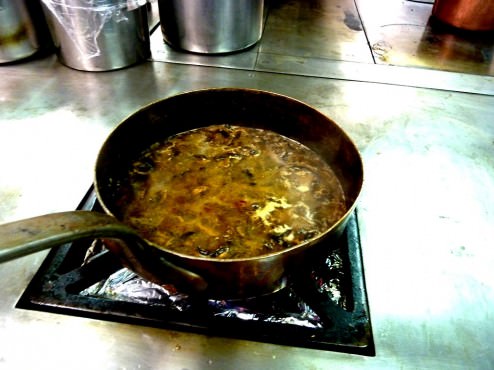 Mushrooms and flambé shallots sautéed with the fat left from braising the chicken, then deglazed with white wine, then dark stock added. 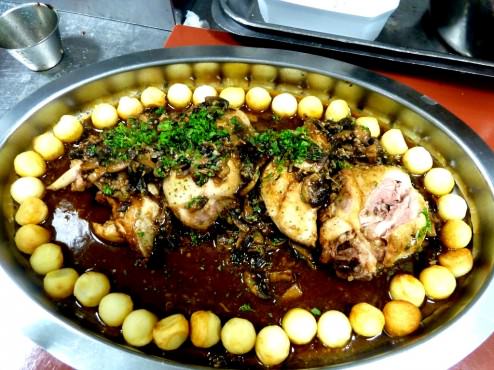 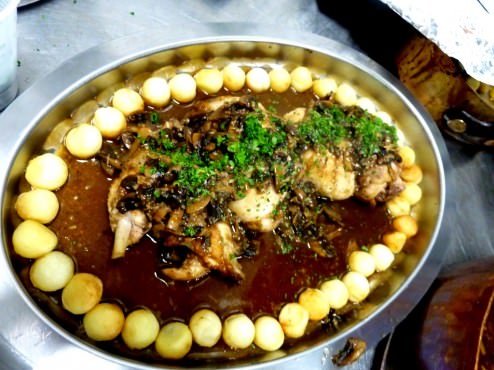 Was a bit undercooked but I made it 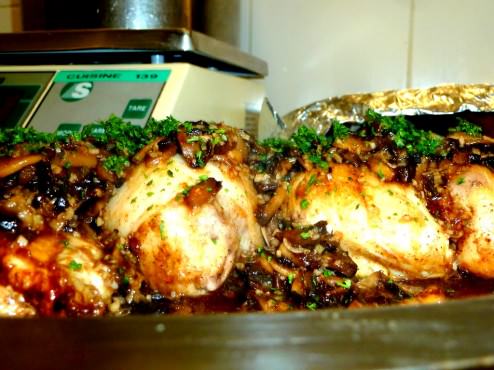 Bad pictures, I know, I was in a hurry to finish the second recipe 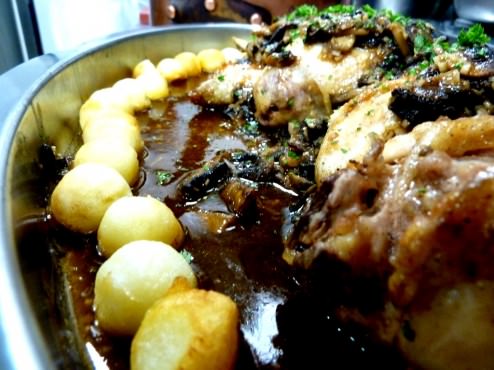 The sauce was pretty good but I think we had better for the eggs already. The potatoes weren't crunchy enough. 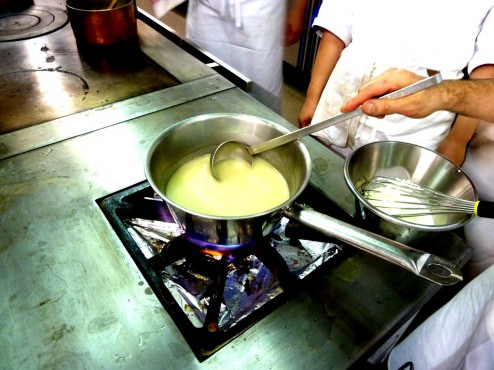 For the next recipe we used white chicken stock, added to roux blanc with diced onions. Added cream but not that much this time. 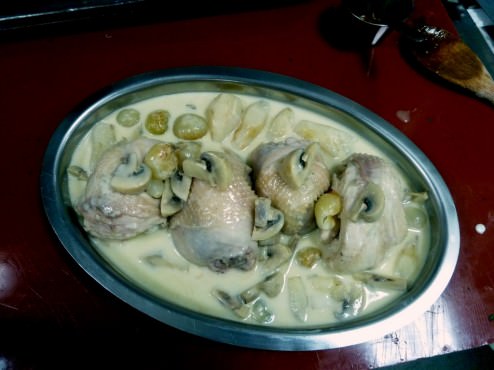 We also cooked jerusalem artichokes, pearl onions and champignons each one a bit different 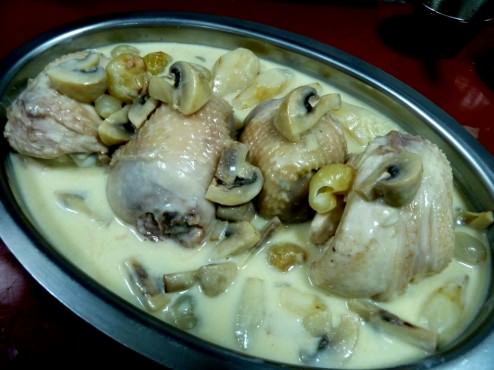 And to be honest, eventually it tastes like chicken.