Basket Case or “This is not a competition!”

Last day at our 139 kitchen in Ferrandi was a special day of “Panier” or Basket. Like in a cooking competition, all of us are receiving a selection of products that we can only use them to cook whatever we want! But we were told several times: this is not a competition. So why does it feel like one?

We got a list of the products ahead of time so that we can come to the kitchen already planned and with a prep list. We had about 4 hours to cook the protein (Rack of pork) with at least 3 side dishes, not including a sauce. The list was intentionally weird. Well, it wasn’t impossible but it sure wasn’t easy to come up with a cohesive dish. This was my biggest problem because the ingredients were pointing to a very French classic dish but we could make whatever we want. I instantly thought I want to do something a bit different than a pork chop with potato puree and cream sauce. Everything I thought of doing had some ingredient missing in the list and chef was very stern with us about using only this list. I asked about olive oil because we had peanut oil twice in the list, could have been a mistake and supposed to be olive oil. But I got a “Shut up Mashav” so I guess no olive oil.

I ended up making pork and coriander steamed dumpling with honey-chilly dipping sauce with chestnut-bacon puree, orange glazed carrot and pineapple and grapefruit taboule with mint and parsley. 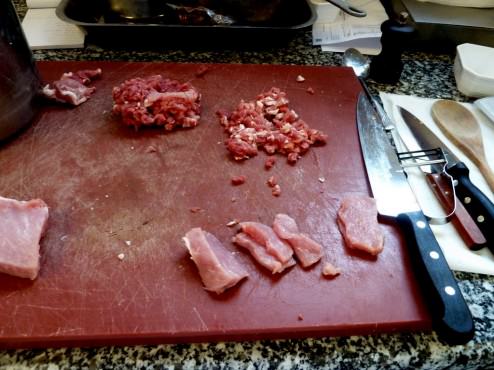 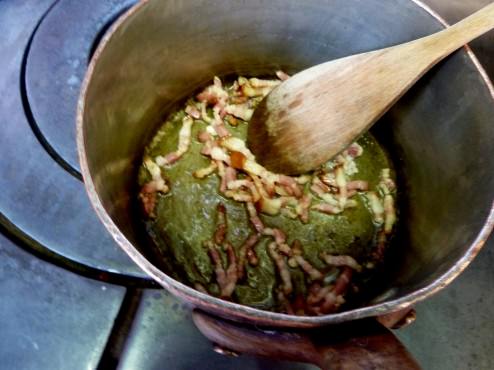 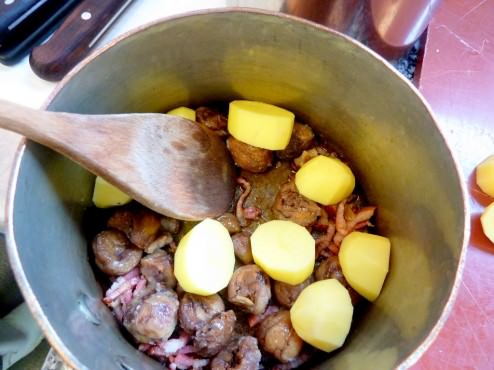 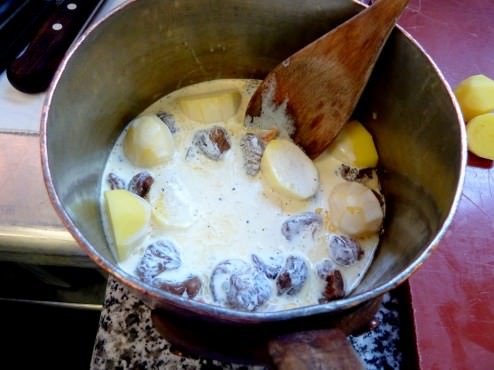 Milk and cream, boiling for a while 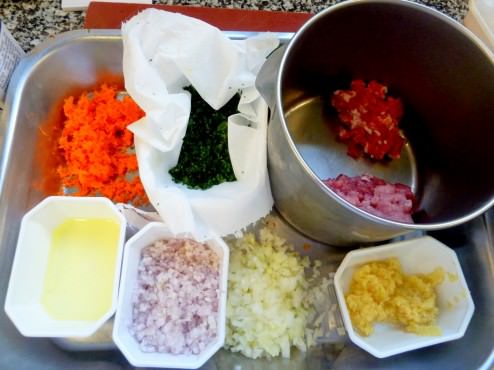 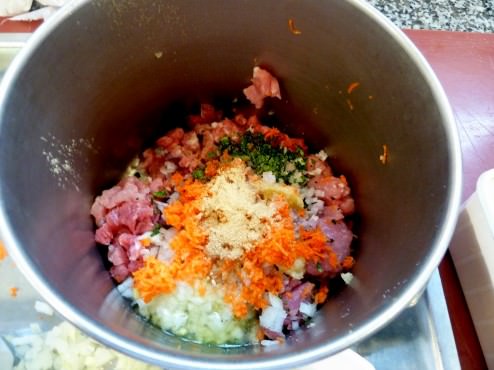 All the ingredients for the pork stuffing 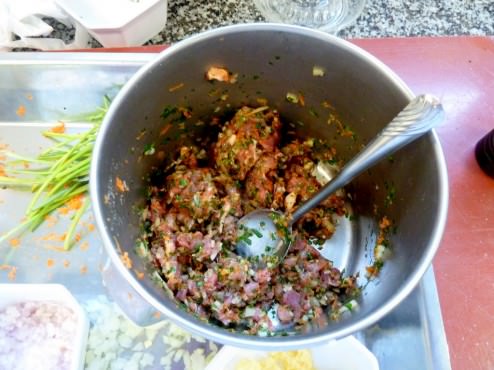 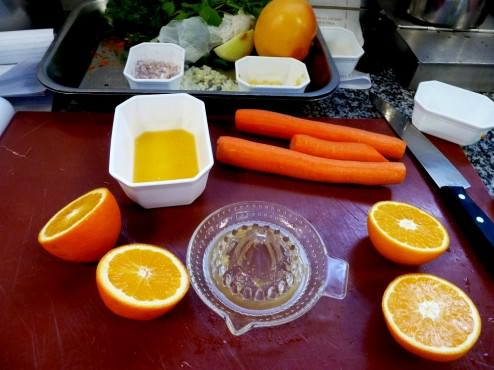 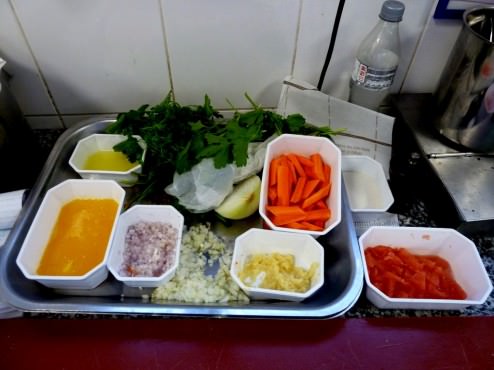 Ready for the next thing 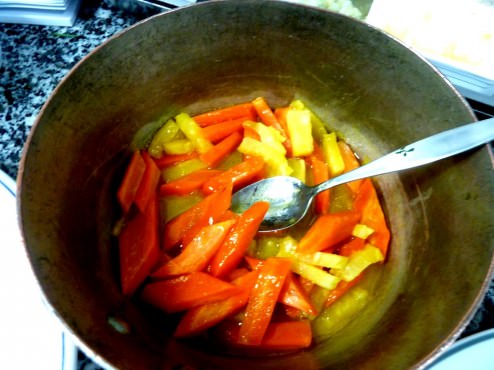 Carrots and pineapples glazed with orange 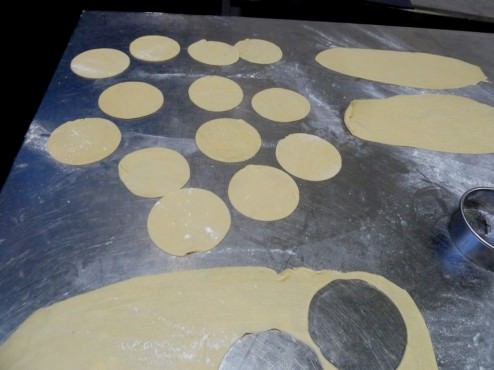 Made a dough and rolled it with a pasta machine, then cut to circles 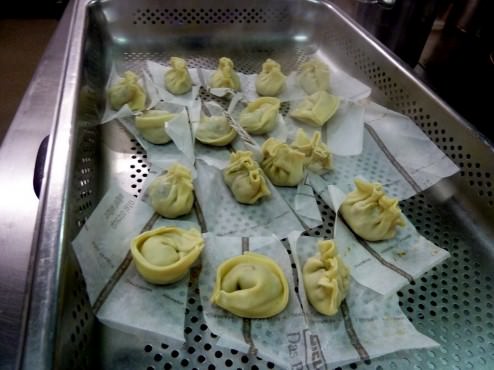 Filled and folded, then placed on a bamboo steamer replacement (wasn't as good as) 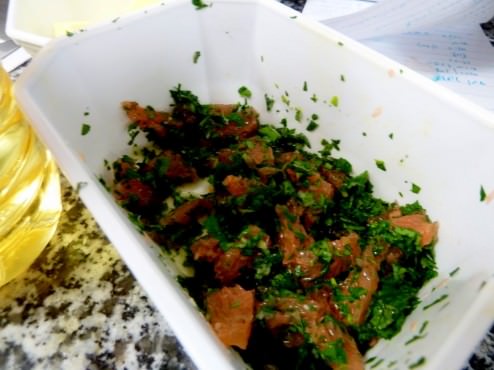 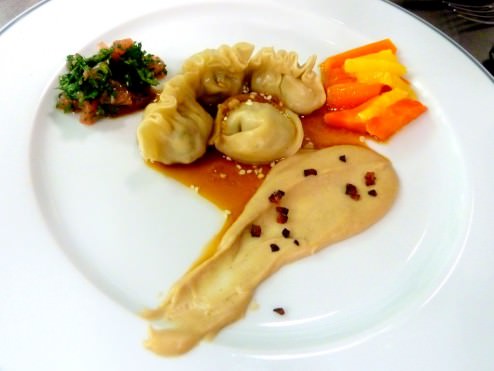 The presented dish. Wasn't that pretty but I had no good idea for the presentation and time was over 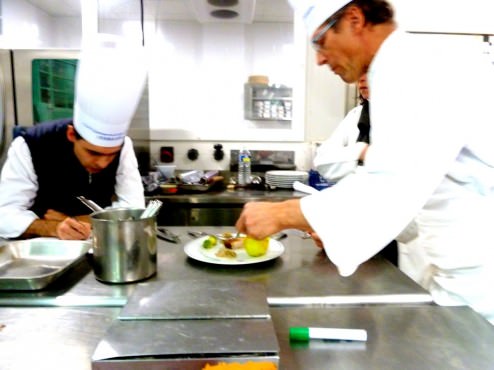 Chefs tasting our creations one by one 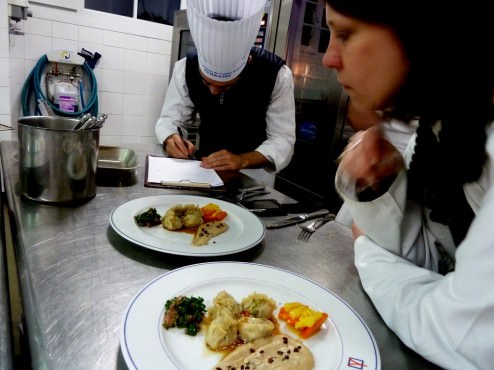 Looking at my plates 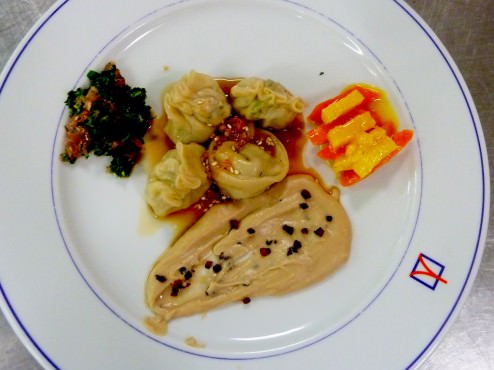 The comment I got from Chef is that there was too much garlic in the dipping sauce. Well, I love garlic, but anyways, I wanted to present the dipping sauce inside a small container so that the dumpling can be dipped. That way the garlic sinks to the bottom and is not that dominant. I had to pour the dipping sauce on top because using this vessel was against the rules. Other than that I feel my problem was lack of connecting line between the 4 main elements.

Other’s people dishes (I have no idea what they are): 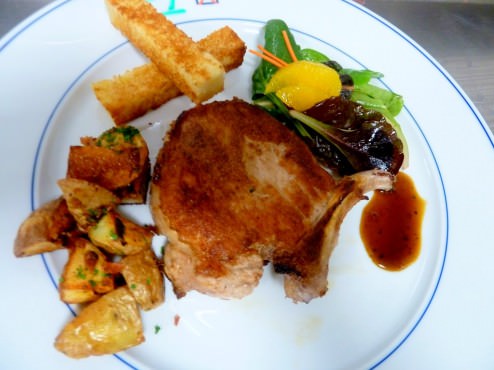 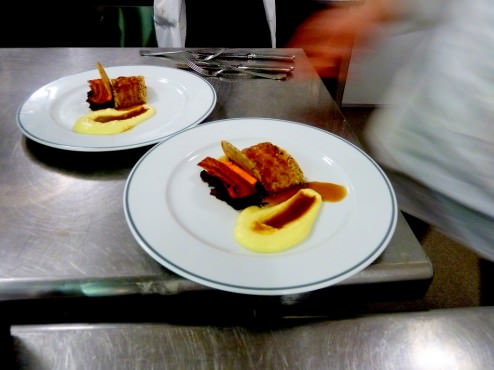 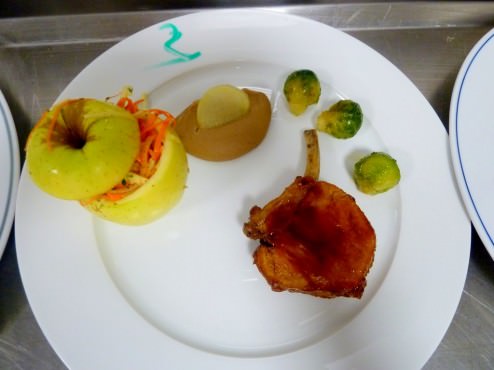 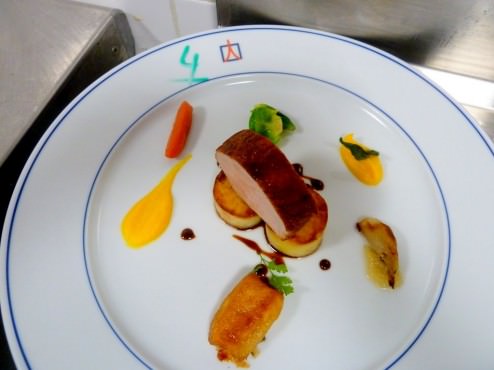 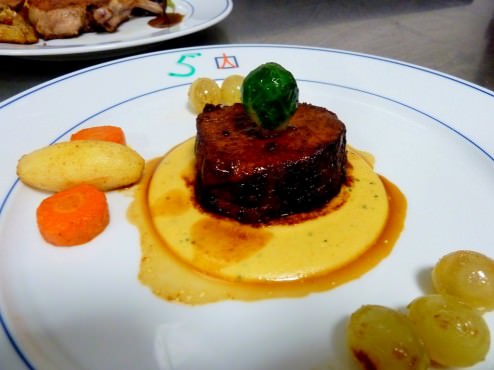 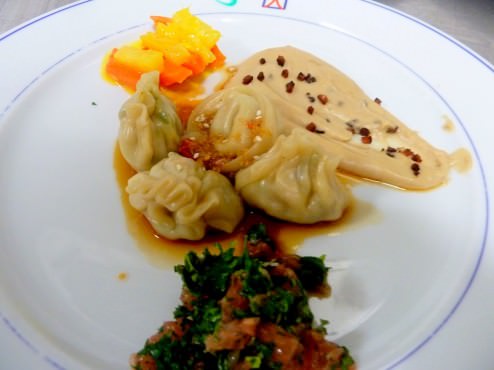 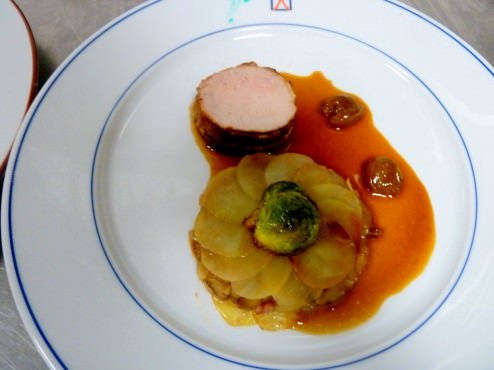 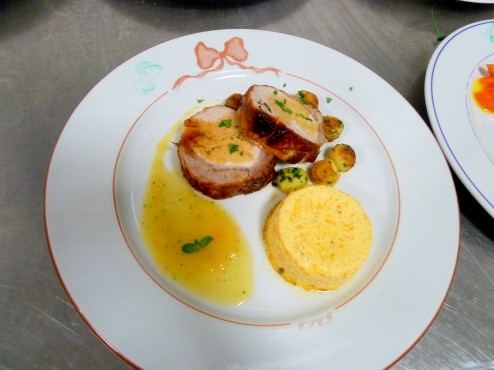 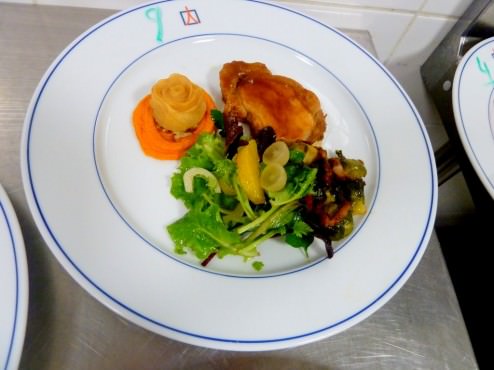 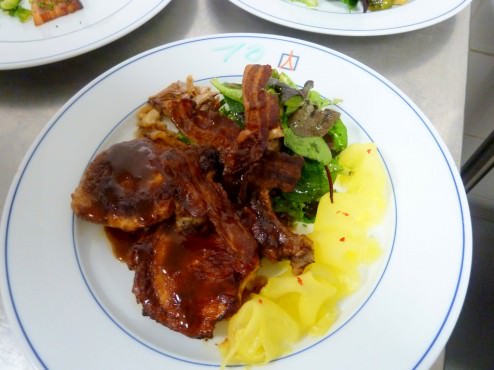 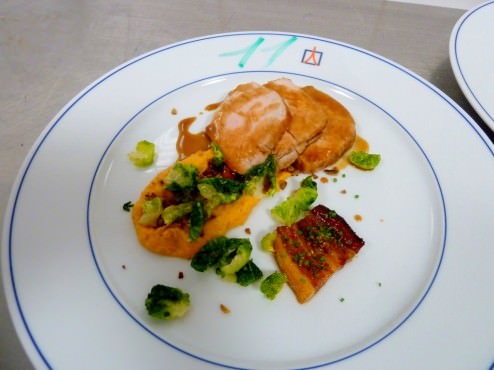 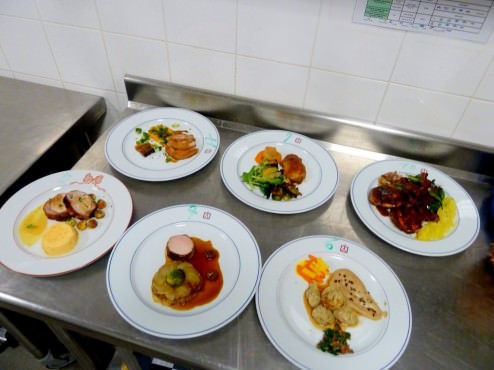 The second plate getting cold in the garde manger

I was a bit disappointed because for some reason I thought we are about to try each other’s plates and have a small meal to symbolize the last day in Ferrandi. Instead the chefs tasted one plate, the second plate went to the garde manger and we had to keep it as it is for the evaluation one by one at the end. Everyone was very concentrated on his own plate and we almost didn’t try any of the other stuff. Most of it went to the trash. Sadly!

It was also our last day with chef Antoine. We took a group picture together. It’s not everyone but it’s the best we could do before everyone ran to the locker room to clear his locker and carry his huge malette back home. 🙁 School Finished. 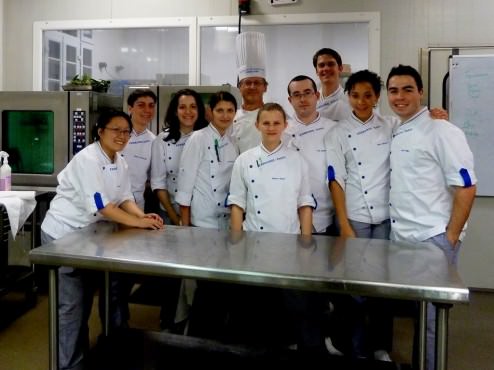 3 Responses to Basket Case or “This is not a competition!”