13:45  in the Pastry lab, all 13 of us ready to begin with our pastry exam. Taking out all the tools we need from our mallets. Chef Antoine enters the lab with an unfamiliar chef to his side. Both of them will judge our work and results today. We are handed a sheet of paper with the amounts and ingredients of all of the different elements of two recipes: Choux Chantilly and Tarte au Chocolat . Everyone start with the Pâte Brisée for the chocolate tart even though the choux has to be served first because the dough has to be resting in the fridge. Measuring all the ingredients and making this dough for the sixth time now. It feels like we were not in a rush and we have plenty of time but still everyone is running with it. The critical initial stage of cutting the butter in the flour going by in too much rush for most of us including myself. When it is resting I’m going ahead to make the choux dough. For me it is going pretty well and I’m happy. Then piping the dough and baking stages are going fine as well. The tart dough is rolled and placed in the tart rings. We’re making two tart bases with the intention to present only one, the better one. To the oven it goes and while baking I start whipping my cream for the chantilly. It is not easy to do by hand after getting used to using the machine but I thought about this up front and put my bowl in the fridge so that the job’s easier. The Choux comes out of the oven, not too dry but not too soft, waiting for me. The tart shells had yet to be baked enough but I realized the oven I used was set to 180 degrees and not 200 so I take out the bag of sugar and switch ovens. I haven’t got a lot of patience with this baking because I know I want to pour in the filling and let it set for as long as possible. So I take out one base and let the other bake for few more minutes. I’m ready to make my chocolate filling but I’m not careful enough and I let bubbles into my ganache! That’s upsetting but I pour it and leave it to set. Then I’m thinking, why not make the other tart base with better filling, I have time. And I start a new ganache. The problem’s that I measure the ingredients again and the cream is already boiling. I add it to the chocolate carefully but then remember the butter! I forgot the butter. Learning all the proportions of the ingredients by heart to the exam I had an amount of 100gr butter in my head. So I’m going to measure real quick this 100gr and put some chunks in my chocolate. While I’m doing this I’m realizing I’m making half a recipe and I should had put in only 50gr!! So I rescue a bit of the butter still unmelted from inside the chocolate and taking it back to the bain marrie to gently melt all the butter. No bubbles this time. I pour the new chocolate to my second tart shell and oh no!! A bit of unmelted butter is visible on the surface. That ‘s even worse than bubbles but I’m thinking I may be able to save it with the torch last minute after it set. So two of my tarts are in the fridge and I’m working on piping the whipped cream into my choux. I’m not sure I piped it perfectly but I serve 8 pieces looking pretty similar with lots of powder sugar. It’s pretty and I’m happy with it: 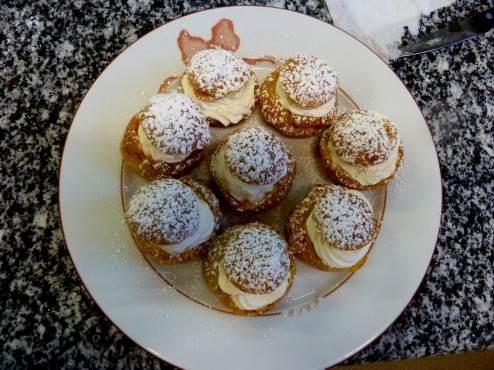 After all the choux was sent to the judges we were all waiting for our tarts to set which takes so much time with chocolate ganache! My second trail is nicely clear of bubbles but trying to save the top from the butter with the torch doesn’t come through. It’s turning uglier, and it is far from being set. 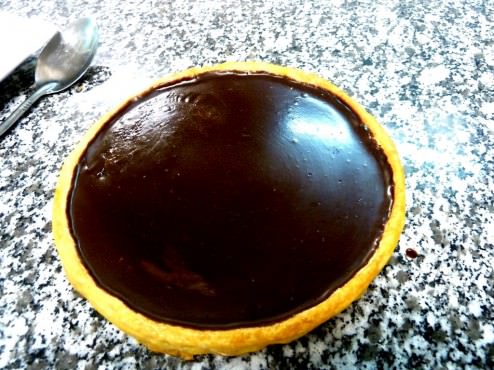 The other tart has the bubbles issue and the shell was less baked so I’m worried about sending it. After almost everyone finishes to present I have to make a choice and my second tart is just not set. I’m sending the first one. Not that happy about it. 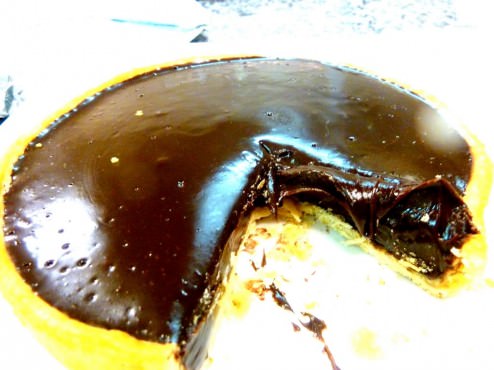 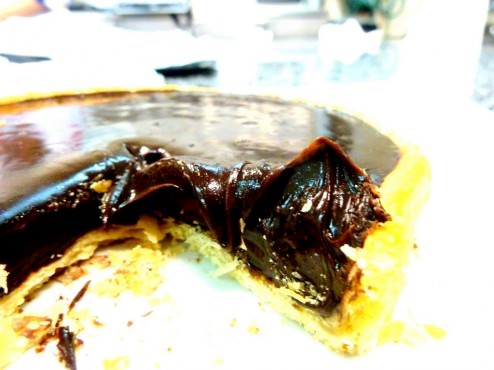 The judges ate a little piece of everybody’s cakes and I’m sure they felt sick while eating mine (don’t forget 13 more tarts from group B who went in the morning). Then we have a critique and comments conversation. They have a lot to say. I think what was relevant to me is the dough that was not sablée enough and maybe not baked enough. The bubbles and the butter (though they didn’t get to see this mistake). I was sick this whole week which made it harder to put attention to details and work carefully but it’s not an excuse. I left the test pretty disappointed, knowing I could have done better. About the results: everyone passed but we have to wait for the full detailed remarks.

By the way, now I have two chocolate tarts at home, and I wish we had done the citron tart because I don’t really love this one.